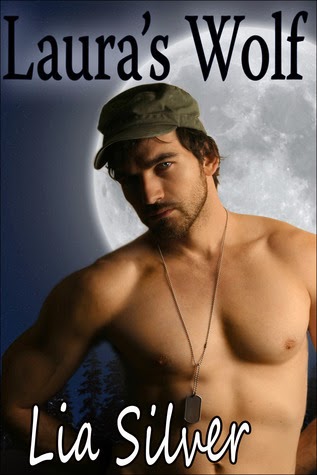 Roy Farrell is convinced that he has no future.

Roy never wanted to be anything but a Marine. But on his last tour of duty, he was bitten by a werewolf. Next thing he knew, he was locked up in a secret underground laboratory. Despite the agony caused by his newly enhanced senses, he managed to escape his captors. Unable to return to the Marines, his entire life shattered, he hid out in the woods of Yosemite.

Laura Kaplan is desperate to escape her past.

Curvy bank teller Laura was acclaimed as a hero for her courage during a bank robbery gone violently wrong. Overcome with guilt over the people she couldn’t save, she fled the city to seek solace in a lonely cabin in Yosemite. But she can’t run forever from the dark secrets of her past.

Can two broken people heal each other?

After Roy is badly wounded saving Laura from a mysterious enemy, they take refuge together in her snowed-in cabin. Forced to depend on each other for their very survival, they must come together to save their lives, face their fears, and find their hearts.

Laura put her hand on Roy’s stomach, under his shirt, stroking his hard six-pack and circling his belly button. She felt his belly vibrate as he chuckled softly.

She slid her hand upward, then froze when she touched a straight edge. A line of tape: his bandage.

“We should stop,” she said, hearing her own reluctance in her voice, her eagerness to keep on going. But someone had to be sensible, and it obviously wasn’t going to be Roy. “It’s too soon for you.”

“What?” Roy sounded like he didn’t even know what she was talking about. He was caressing her breasts, making it hard to concentrate.

“Or, at least, we shouldn’t go any further,” she said.

He pulled her down and kissed her. She forgot what she was saying, lost in passion and sensation and the heat of his mouth.

Then she came to her senses and broke away from the kiss. “We shouldn’t have sex. It’s too strenuous. You’ll pass out or start bleeding or something.”

Roy took his hands away and rolled over on to his side. “Thanks for the vote of confidence. Now I feel like a real man.”

“I know. I was teasing.” He wrapped one of Laura’s curls around his finger and gave it a playful tug. “Listen, if you don’t want to have sex, just say so. But I’m up for it. I rested all day. I feel good. And I promise to do it gentle…” He kissed her, slow and gentle and sensuous. “And easy…” Another kiss. “And slow.”

A final kiss, the slowest and easiest and gentlest of all.

“God, where did you learn to kiss like that?” Laura said, once her head stopped spinning. “That nearly made me pass out.”

“You inspired me,” Roy replied. “But seriously, don’t worry about me. I won’t do anything athletic. I won’t dangle from the ceiling… or dangle you from the ceiling… or put my ankles over your shoulders… or run through every position in The Joy of Sex, in alphabetical order… or even just the ‘eighteen mice on a golden throne’ position.”

“What a shame,” said Laura, laughing. “‘Eighteen mice’ is my favorite.”

Roy went on, “…Or pick you up and make love to you standing up.”

That doused cold water on her amusement. “Of course you won’t. You couldn’t lift a fat girl like me anyway.”

“Anyway, if your previous boyfriends couldn’t pick you up, it’s not because you’re too heavy, it’s because they were slackers. My everyday gear— the stuff I lug around all day, my SAW and my rucksack and my body armor and so forth— weighs eighty pounds. Depending on the mission, I might carry more weight than that. If I wasn’t in danger ofbleeding or passing out,” he imitated her cadence, “I could easily lift you.”

“You’re never going to let me forget I said that, are you?” Laura asked. Then, her voice sounding fragile in her own ears, she added, “Seriously?”

“Seriously. If you like… if this time isn’t a crushing disappointment, and you want to try again… I’ll prove it you later.”

Crossing her fingers that it wouldn’t end in blood and tears and passing out, Laura said, “Okay. You’re on.”

Why I wrote the book:

I’m a therapist specializing in the treatment of PTSD (post-traumatic stress disorder), and my work inspired the book in general and the hero in particular. Many military romance, new adult, and other writers have written sensitively about PTSD, so I'm not blazing a new path. But everyone has their own perspective, and my professional experience (in addition to my personal experience) might make this book a little different from what one normally reads.

But don't think the book is a complete angst-fest. One of the main things I wanted to get across is that while PTSD is painful and frightening, it does not have to ruin your life and make every moment a misery forever. So a romance novel, with its happily ever (not perfectly ever) after seemed like the perfect vehicle for what I wanted to say.

Also, I enjoy writing banter, adventure, action, sex scenes, "trapped in a snowed-in cabin," and psychic powers. And so you have it: a message of hope wrapped around the adventures of a werewolf Marine and a curvy woman with a secret.

BIO
The author works as a therapist, specializing in the treatment of post-traumatic stress disorder (PTSD).
“Lia Silver” is a pen name used to separate her writing career from her therapy career.
When she isn't working, reading, or writing, she enjoys cooking, hiking, horseback riding, martial arts, and cuddling her cats.