Review: Stormbound with a Tycoon by Shawna Delacorte 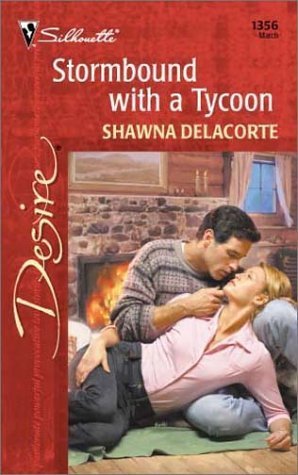 BLURB
Wealthy, jaded playboy Dylan Russell had sought an isolated cabin in the woods to escape his fast-paced life and reconsider his future. He wanted solitude... awoke to a woman in his bed! Nothing had prepared Dylan for the sight of his best friend's sister... the sensual spark that her ignited.After a canceled project, publicist Jessica McGuire looked forward to days of relaxation. She never expected to encounter the man who had stirred feelings deep in her soul years ago. Stranded with her in a storm, Dylan beckoned her closer with his bedroom eyes. But would Jessica have to be content with only a few nights of passion when she yearned for his love for a lifetime?

I was looking for a quick read and hence my decision to read this title..  This title is different from what I have come to expect from the harlequin desire line.  If you like your romance stories hot and steamy then this book is not for you. If on the other hand, you like sweet romance stories with light, love scenes where you have to use your imagination then you will love this book.

This story was told from the POV of the main characters.  Some readers may find the switching between the two POVs distracting. I don’t mind it as it provided me with insight into their thoughts and emotions.

with a Tycoon tells the story of Jessica McGuire and Dylan Russell.  Jessica had a crush on Dylan since she was fifteen years old; however, to Dylan she was his best friend’s sister and nothing else.  Fast forward sixteen years later, these two had moved on with their lives, but it did not turn out as was expected. Jessica is a divorcee, who is determined to get her life back on track and prove that she does not need a man to define her.  Dylan is an ace at making lucrative business deals; however, after a deal gone bad he began to question his judgement as a result he decided to re-evaluate his life. To do so he asked his best friend for the use of his cabin.  Jessica, unaware of this arrangement decided to stay at the cabin to get some much needed rest. The two became stranded as a result of a storm and was forced to endure each other company throughout the duration of the storm.

There were a lot of internal battles of emotions in this title.  Both characters had their inner demons to deal with and found it difficult to express their feelings.  I thought Jessica was a bit when it came to Dylan. She is willing to think the worst of him. In spite of this she had difficulty fighting her attraction to him.

Dylan was not looking for a committed relationship based on of his past as such he was clueless as to how to deal with his feelings for Jessica.

This is a story of love, self-discovery and acceptance. It depicts that love will find you when you least expect it and with the most unlikely person.

Overall, I found this to be an ok read.