My choice today is from

EVEN VAMPIRES GET THE BLUES
by
SANDRA HILL 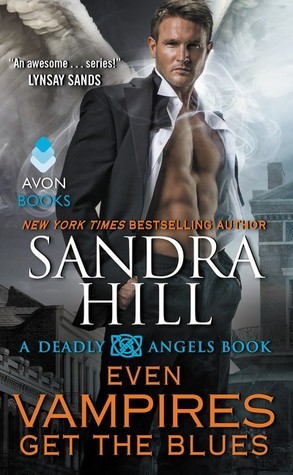 GET IT AT AMAZON

BLURB
New York Times bestselling author Sandra Hill delivers a sizzling new entry in her Deadly Angels series, as a Viking vangel's otherworldly mission teams him with a Navy SEAL who's more than his match— she's his predestined mate . . .

The fact that vampire angel Harek Sigurdsson was a Norseman in his mortal life doesn't make thawing out after exile in Siberia any easier. But things heat up when his search for evil Lucipires connects him with Camille Dumaine, a human who thrums with sensual energy that can mean only one thing: she's the mate Harek's been seeking for centuries . . .

The SEALs call her "Camo" for her ability to blend into a crowd—yet Harek's intense blue gaze singles Camille out like a white-hot spotlight. The security wiz was hired to help bring down a ruthless band of international kidnappers, but Camille senses an unspoken agenda—besides Harek's bold declaration that she's his "destiny." Just Camille's luck that the sexiest man she's ever met may also be . . . a vampire!

FRIDAY 56
(Harek had been yearning for even teeth for many years, by the by. Fangs got in the way, even when retracted, for lots of things, like eating corn on the cob, sipping through a straw, blowing up a balloon, going down on . . . Never mind. Even kissing, an activity sorely lacking in his life for a looong time.)