- Tuesday, September 01, 2015
Teaser Tuesdays is a weekly bookish meme, hosted by MizB of MizB of A Daily Rhythm.. Anyone can play along! Just do the following:
• Grab your current read
• Open to a random page
• Share two (2) “teaser” sentences from somewhere on that page
• BE CAREFUL NOT TO INCLUDE SPOILERS! ( sure that what you share doesn’t give too much away! You don’t want to ruin the book for others!)

• Share the title & author, too, so that other TT participants can add the book to their TBR Lists if they like your teasers!


My teasers today are from 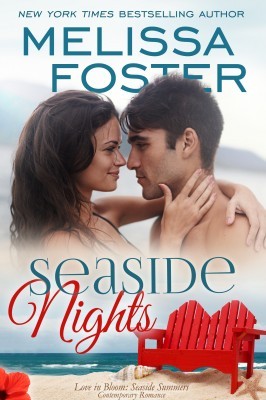 Fall in love with Sky Lacroux and Sawyer Bass in Seaside Nights, the fifth book in the Seaside Summers series by New York Times bestselling author Melissa Foster!
Sky Lacroux has finally realized her dream and opened her own tattoo shop in Provincetown, Massachusetts. She's happy as can be, preparing the shop for its grand opening and renting a cottage in the Seaside community while renovations to her new apartment are being completed. The only thing missing is the one thing she longs for, and has no control over—love.
Sawyer Bass, a professional boxer, plays his guitar at a local bar to escape the painful reality of his father's deteriorating health and a recent health warning of his own. But when he spots a stunning brunette across the room, escaping reality goes out the window, and the beautiful woman becomes the focus of his next song—and maybe even the rest of his life.
When Sawyer walks into Sky's tattoo shop and sees the woman from the bar—Sky—the chemistry between them is instant. Sawyer is everything Sky could ever hope for in a man. He's honest, loving, sensitive, and potently virile—but boxing goes against everything Sky believes in. The closer they become, the more she realizes that her alpha boxer is waging his own emotional battle—only the battle she thinks he's waging isn't the one that threatens to tear them apart. -

Now it’s like looking in a mirror, at what could happen to me if I get hit in the head again. Now I hear his slowed voice telling me to give it up and follow my heart to something else. Now I’m standing between two rivals playing Russian roulette. On one side is my father’s care and quality of life. On the other is something I haven’t thought about with any great significance— my own well-being.

TEASER 2
She looked out the front window and saw Sawyer heading down the alley toward the parking lot. His shoulders were strikingly broad, his waist narrow. Every step was determined, unlike those walking casually on the main road.


What do you think? Would you want to read more?