REVIEW: HEART of the MUSIC by KAITHLIN SHEPHERD 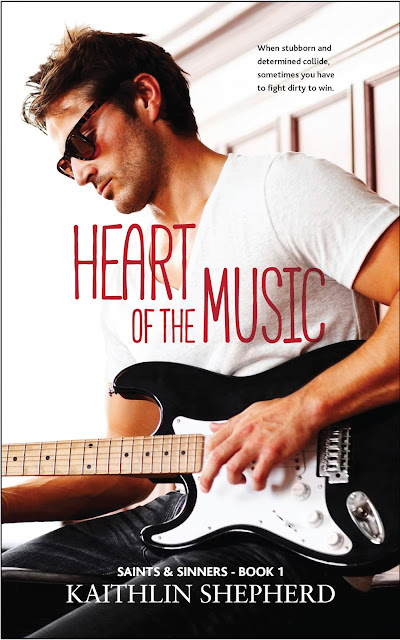 When stubborn and determined collide, sometimes you have to fight dirty to win.

Saints and Sinners front man, Jarrod Banks, has the looks and the voice that make women swoon, and he knows how to take advantage of every lyric and every wink. Not used to having to fight for the attention of an attractive woman, he can’t help but be drawn to his publicist, Patricia, who refuses to play his games. She’s the one woman whose love he’s going to have to earn and he’s not afraid to fight dirty.

Even managing a rowdy group of music sensations, Patricia Monroe is the consummate professional. For five years, she has kept her attraction to Jarrod under wraps, enduring his endless supply of women, but one day when locked in an elevator, revelations are made that could change it all.

When their relationship is put to the test, Jarrod is left with no other option than to pull every dirty trick in the book to show her she’s the only woman he’ll ever love.


Heart of the Music by Kaithlin Shepherd is a romantic story about a country music star and his publicist. I found this to be an interesting concept as such I couldn't wait to read their story.

Five years ago, Jarrod Banks met the woman, who would change his life forever. Little did he know that this change would be twofold. Not only would she make him the most sought-after country music star, but she would steal his heart in the process.  From the moment, Patricia Monroe laid eyes on Jarrod she knew her life would never be the same. For five years she kept her feelings for him under wraps.  She felt it would not be professional for her to be romantically involved with her client. Furthermore, she feared he could not be faithful, due to the fact that he had an endless supply of women. She was not interested in having her heart broken.

Jarrod is every woman's fantasy. He is handsome, sexy and sweet. He is a songwriter and the lead singer for the Saints and Sinners band. What I loved most about him was his humility. He never forgot where he came from. He was not the type of star, who allowed his money and fame to define him. Patricia discovered the Saints and Sinners band five years ago. Since then through diligence and hard work she has placed them on the music map.  I know it cannot be easy to be around the man you love and not being able to tell him how you feel. This is exactly what Patricia has been doing for the last five years.

The story was told from the third person point of view. However, in this case, it was done from both characters’ perspectives.  This assisted me significantly in understanding what they were both feeling.  I enjoyed the banter between the characters.   I can't wait to read the other band members, story.

The story moved seamlessly between the past and the present. In doing this, the author was able to provide sufficient background information on the characters.  I believe this helped me to understand the challenges they faced.

The romance did not happen quickly. They took their time exploring their feelings for each other. However, their journey was not easy. Doubts, insecurities, and outside influences reared their ugly head.  Will Jarrod and Patricia be able to overcome these obstacles and cease their happily ever after?

From the moment I started this book, I was hooked.  I could not get enough of Jarrod and Patricia.  With that being said I am eagerly awaiting the next book in the series.

Favourite Quote: 'You never have to worry about me leaving you because loving you is the reason I breathe.'

Kaithlin Shepherd was born and raised in Canada where she learned to figure skate and crafted a love affair with coffee. Growing up in a household filled by strong-headed women, she learned early on that life is what you make it. You’ve probably never met a bigger country music fan and in the words of Brooks and Dunn, she’s a die-hard ‘George Strait junkie.’ Constructing a world away from her real life, Kaithlin loves the feeling of creating a universe where her fans can forget about everything in their life. She loves writing about hot alphas and doesn’t shy away from turning up the heat with scorching hot sex scenes.