Review: Time to Heal by Lisa B. Kamps 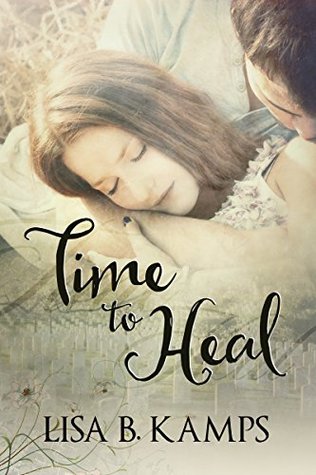 Jake Evans has been in the Marine Corps for seventeen years, juggling his conflicting duties to country and his teenage daughter. But when he suffers a serious injury and is sent home, he knows he'll be forced to make decisions he doesn't want to. Battered in spirit and afraid of what the future may hold, he takes the long way home by driving cross-country. He never expected to meet Alyce Marshall, a free-spirited woman on a self-declared adventure: she's running away from home. In spite of her outward free spirit, Alyce has problems of her own she must face, including the ever-present shadow of her father and his influence on her growing up. She senses similarities in Jake, and decides that it's up to her to teach the tough Marine that life isn't just about rules and regulations. What she doesn't plan on is falling in love with him...and being forced to share her secret.

I received a complimentary copy courtesy of Book Rythm LLC in exchange for a honest review.

Time to Heal by Lisa B. Kamps is a contemporary romance that tells the story of two strangers who decided to take a road trip.  They may have started out on separate trails, but their paths were destined to cross. Initially, it appeared that the reasons behind their trip may have been different, however, by the end of the story we see that although different in nature it had the same goal.

Jake Evans has been marine for seventeen years. He was placed on medical leave as a result of an injury he received on his last tour of duty.  Due to his injury, he was not physically and mentally fit for active duty.  With nothing but time on his hands, he was faced with the prospect of returning home to be with his teenage daughter. However, it would appear that he was not keen on doing that anytime soon, hence the reason for the road trip.

Alyce Marshall has decided to go on a self-declared adventure.  She needed to prove to herself and her father that she could survive on her own. While, on her journey she met Jake, whose truck had broken down.  She offered him a ride into the next town.

Jake is a brooding hero. It is evident that he is suffering from PTSD. He was struggling mentally, emotionally and physically. Meeting Alyce was a shock to his system. He had no idea what to make of her. I sure did not know what to make of her either.  Alyce is the type of person who does things on the spur of the moment.

I understood why Jake was delaying the inevitable. He felt guilty that he tried to leave on his last tour without saying goodbye to his family. The guilt was so heavy, he refused to let them know that he had been sent home.  I guess the pain of saying goodbye got to him.  Alyce clearly had deep seated issues. However, for some strange reason, she was good for Jake. She helped him come to terms with his feelings.

The plot was realistic to some extent. However, there were aspects I could not wrap my head around. Why would someone choose to go on a road trip with someone they met on the side of the road and then become intimately involved with them?   The attraction between Jake and Alyce was instantaneous. They did not much about each other, but that did not stop them from becoming intimate. They both had their secrets. In addition, I found it strange that Jake would carry someone whom he barely knows to meet his daughter.

I must confess that the story did not grab me in the way I had expected.  The blurb indicated that this would have been an emotional read. However, it did not elicit the intense emotions I was expecting.  It took me awhile to get into the story. I was not feeling it. Usually, for a book this length, I would read it in one sitting. However, it took me two days in which to complete it.  It would appear that the author was trying to wrap up the story too quickly, which resulted in the quality being compromised.

In spite of this, the story did have some redeeming qualities. The writing style was good and I liked the characters.   Although this was not my favourite, I would recommend it to readers looking for a short but sweet romantic story.