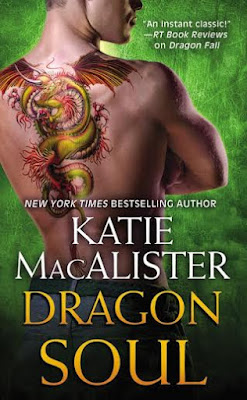 Today I am hosting Kate MacAlister, author of Dragon Soul on Totally Addicted to Reading

Nadene: What would readers be surprised to find out about you?

Kate: Goodness. So many things, I would expect. Perhaps the fact that I never went to high school (but did go to college). Or that I wanted to be an astrophysicist. Or maybe that I have a bunch of very slight touches of facial blindness, dyslexia, and synesthesia. All of which makes it an adventure when writing out a check that has amounts using 4 or S (both of which are red).

Nadene : Who gave you the one piece of writing advice that sticks with you to this day?

Kate: Surprisingly, no one. I think the reason I write is because I’m a lifelong reader, and have been from a very early age. Reading so many good books gave me the desire to write and tell my own stories, and more or less served as an example of what to do and what not to do.

Nadene:  Is there one thing you have to have when writing?

Kate: I’ve always wanted to be one of those fancy people who had a lovely writing nook, with soft lights, an ergonomich chair perfectly molded to the body, soft music playing, and candles burning to provide just the right ambiance needed to put words on paper. The sad reality is that I have to write with dogs running around crashing into each other and furniture while flinging various toys and bones onto my lap to entice me to play, my cat trying to sit on my knees in her daily attempt to crush my kneecaps, the phone ringing at the most inopportune moments, and all the other chaos that life throws at us just when we want to be left alone. So no, I don’t have any writing rituals, but I dearly yearn for the day when I can have some.

Nadene:   How did you choose the names of your characters?

Kate: I love historical names, so I tend to hang out on census sites, looking up naming patterns for whatever era is pertinent. I also love ethnic names, so I maintain a list of names that I like and want to use one day. Also, I have a great book that lists every character in Shakespearean works, and pull from there a lot, too.

Nadene: How has music played a role in your life and in your writing?

Kate: I love music, but don’t need it to write—however, I often have Pandora on simply to drown out some of the sounds of animals playing, other people doing things in my house, etc. Sometimes I set up soundtracks to go with a book, but other times I just pick a channel on Pandora and let it go. One of my go-to channels is House of the Rising Sun, which has all the old 1970s music on that I that I remember from my childhood.

Nadene: When was the moment that you knew you had to be a writer?

Kate: When I turned in a non-fiction manuscript. I turned to a friend who was visiting at the time, and told her, “Now I’m going to write a novel.” Non-fiction was just so dull and limited, that I wanted to have some fun with a book, and write characters, and dialogue, and make people suffer. In a literary sense, that is.

Nadene: Do you have any favorite book boyfriends of your own?

Kate: Oh, mercy, just line my books up and start reading off the hero names. I’ve said before that I write books for myself first, and that’s absolutely true. I love all of my heroes, and it’s only because publishers won’t let me write all the heroines as me that I bother with writing those dishy men females who are worthy of them.

Outside of my books, I was one of those girls who grew up with the hots for Sherlock Holmes. As an adult, I’ve been quite fond of several of Georgette Heyer heroes, particularly those who give in to their senses of humor (Sir Tristram from Talisman Ring, and Freddy Standen from Cotillion).

Nadene: Where do you find inspiration for you writing? Do you use real people/places as a foundation?

Kate: I’ve always told myself stories, so writing is really just an extension of that. My inspiration is my muse, who I picture as a bon-bon eating diva who reclines of fainting couches a lot, waving a languid hand whenever she wants something, and basically ruling me with threats of going away on vacation if I attempt to work her too hard.  I seldom use real people in my books, since the people in my head are much more flawed and thus suitable for me to torment, but I do use as many real locations as I possibly can. I rely heavily on past trips to Europe as the source of many locations, and those I haven’t visited I usually research by finding people who live there, and haunting online webcams, and photo galleries.

We stayed like that for what seemed like an endless amount of time before Rowan finally lifted his head, his chest still heaving as he panted, “You’re going to kill me if you do that again.”
“Me?” I asked, unlocking my legs and regaining my feet. I had to cling to him for a few minutes while they turned from jellied blobs to solid form. “All I did was show you a watch. You are the one who turned into a wildman in the bedroom. And it’s not even our bedroom. Oh hell, it’s on fire, too.”
He grinned at me, and stooped to pick up my underwear before stamping out the fire that burned in concentric rings around us. “I believe we’re going to have to have a ban on gold objects until I can better handle my reaction to it. I’m sorry about your panties. And the wall.”
I took my undies from him, and stuffed them up my sleeve. “I’ll see if I can’t repair them. What wall?”
He pointed behind me. I glanced over my shoulder and did a double-take at the black shape burned into the wood.
“Oh hell, that’s me, isn’t it?”
His smile was one of pure satisfaction when he took my hand and led me from the room. “When we do it, we do it properly.”
“Uh huh. And how are we going to explain that to the cabin’s occupants?”
He gave me a roguish look, kissing my fingers as he said, “If they say anything, I’ll offer to pay for a new cabin, all right?”
“All right, but stop swaggering around like having sex so hot you burned my shape right into the wall is a point of pride. We’re never going to be able to have nice things if we keep burning them up every every time we make love.” 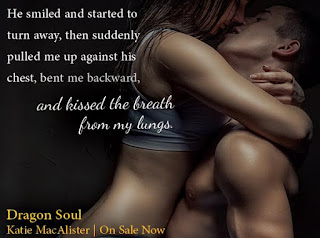 For as long as she can remember Katie MacAlister has loved reading, and grew up with her nose buried in a book. It wasn't until many years later that she thought about writing her own books, but once she had a taste of the fun to be had building worlds, tormenting characters, and falling madly in love with all her heroes, she was hooked.

With more than fifty books under her belt, Katie's novels have been translated into numerous languages, been recorded as audiobooks, received several awards, and are regulars on the New York Times, USA Today, and Publishers Weekly bestseller lists. A self-proclaimed gamer girl, she lives in the Pacific Northwest with her dogs, and frequently can be found hanging around online.
http://katiemacalister.com/
https://twitter.com/katiemacalister
https://www.facebook.com/katie.mac.minions