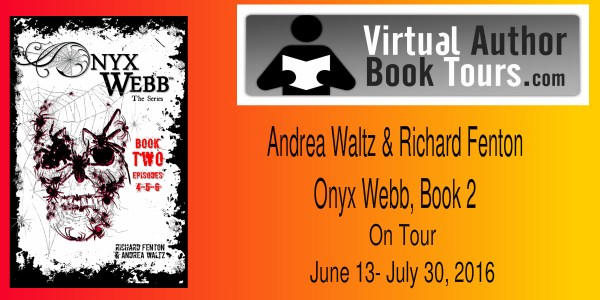 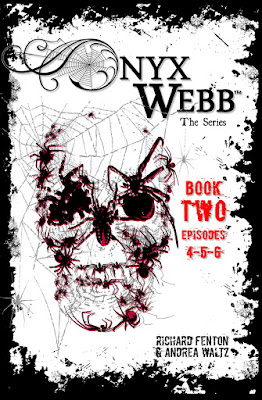 Best-Selling Authors Fenton & Waltz Welcome You to the World of Onyx Webb. This is Book Two. (Episodes 4, 5, and 6) One reviewer says, "Fabulous. Different. Odd. Crazy. Wonderful. I've never read anything like it. You've created the weirdest, coolest new genre of fiction and I love it."
The Onyx Webb series follows the unusual life of Onyx Webb along with a central group of characters in various locations and times. Written like a book version of a supernatural soap opera, each character’s story moves forward with most every episode. It may appear that the characters are entirely unrelated and yet episode by episode, the connections will become clearer And this is especially true in Book Two. Like being an inch away from a spider web, with each book, the web will move further and further away revealing the full story of every character and most importantly, the stunning conclusion for Onyx Webb herself.
In Book Two... It's the 30's and Declan Mulvaney and best friend Tommy Bilazzo learrn to survive at the Open Arms Orphange despite the adults who run the place. It’s 2010, and Koda Mulvaney is insane trying to see the girl in the mirror again. Onyx Webb is finds herself living all over the country married to the crazy German, Ulrich, with no way out.

Nadene: Thank you so much, Andrea & Richard, for visiting Totally Addicted to Reading! I appreciate you taking the time to answer my questions.
Andrea/Richard: It’s our pleasure, here you go!
Nadene: Will you share a short bio with us?
Andrea/Richard: We are best known as the authors of Go for No! (which hit #1 on Amazon’s Sales & Selling list and has remained in the Top 10 for the last five years.) We’re professional speakers on how to overcome fear of failure and rejection.  The Onyx Webb series is our first serious dive into fiction and Book One was awarded Finalist in the National Indie Excellence Awards for Cross Genre. We have been in love with creating stories together since meeting almost twenty years ago and even spent some time in Hollywood writing screenplays, being represented by the producer of Breakfast at Tiffany’s.


Nadene: When did you both first realize you wanted to be a writer?


Andrea/Richard: We’ve both always wanted to write as a profession since we were young. We both loved reading and making up stories.

Nadene: What’s been the most significant aspect of your career?

Andrea/Richard: So far, it was hitting #1 with our non-fiction book called, Go for No! As for writing Onyx Webb, it was finishing Book Six and getting it to our final copy editor this month. Just knowing we are now over half way done is huge!

Nadene: When writing what do you find easy, challenging and rewarding?

Andrea/Richard: People sometimes say writing is “hard work.” Without playing semantics, it’s not hard work to us. Hard work to us is digging ditches, being in the military, police or a fire fighter – those things. That said, writing is pain-staking work that requires attention to detail and focus. That is the challenge. The “easy part” is coming up with the twists, turns, and story ideas. That comes pretty easy to us. It’s always rewarding knowing we’ve come up with someone that will shock or surprise readers. It’s extra rewarding when they tell us so!

Nadene: How do you choose your characters’ names?
Andrea/Richard: We try to find names that very distinctive and therefore memorable. We often will check the year the character is born to see what names were popular at the time – and then we will find the ones that are unusual.  For example, we have two boys of college age in 1979 and their names are Quinn and Wyatt. Many times it’s about creating a feeling – so our beautiful, kind piano prodigy (Quinn’s sister) is Juniper. We liked the youthful, sweetness of the name – it felt like her to us.

Nadene: Please tell me one thing about your new book that readers won’t know until they read it. Where did the idea came from?

Andrea/Richard: Readers should have little idea where Book Two in the series is going. But we can say that the little boys at the orphanage, Declan and Tommy, will be huge parts of this book and the next. They end up getting involved in the mob. That idea came because of Richard’s fascination with the mob life and having grown up in Chicago and seeing a bit of that world from afar.

Nadene: Have you written any other books that we should read next?

Andrea/Richard: We’d love people to continue reading the series. We have Books 1-5 of the Onyx Webb series, and Book Six is out in July.

Nadene: If your books were turned into movies, who do you think would be suitable to play the lead roles?
Andrea/Richard: We have a ton of characters in our series. There are so many acctors and actresses that would be ideal for our many roles. I would like Margo Robbie to play Mika Flagler. I’m still certain who would play our super sexy billionaire, Koda Mulvaney. Maybe Aaron Taylor Johnson or Alex Pettyfer.

Nadene: What was the biggest challenge you encountered during the writing stage?
Andrea/Richard: We’re still in it – finishing the series!

Nadene: Do you have any advice for new and prospective writers?
Andrea/Richard: The most clichéd advice there is but it is true for us – write what you love to write. You might not find an audience easily, but you will love the process and for us anyway, that is all that matters.

We are now in the second book (episodes 4-6) of the supernatural and mysterious series ‘Onyx Webb’. It picks up from where book one left off. To get a feel for the characters and to understand the flow of events you will have to start at the beginning. Failure to do so will leave you feeling confused and disoriented.
The story spans three different time periods.  It features a variety of characters from different walks of life within each of these periods. In the prequel, it was evident that there was some connection between the characters from the different time periods.  What was not evident, however, was the manner in which they were connected. In this installment, the connections became much clearer.
I found this installment to be just as entertaining, intriguing and riveting as the prequel. My curiosity has been further peaked, and I am eager to know who is the girl in the mirror. What is her connection to Koda Mulvaney? Is she real or just a manifestation of his dreams? I am intrigued by the events of Onyx’s life. She has such a bright future before her, but her husband Ulrich is determined to snuff it out. Will he succeed in his diabolical plan? Then there is Juniper Kole, who has mysteriously disappeared.  Will the truth be revealed and justice served or will an innocent man pay for a crime he knows nothing about?
I was taken on a journey that was not only exciting but was also mysterious and suspenseful. It gave me enough to whet my appetite but left me craving for more. Indicative of its title, the story weaved a web of intrigue. This episode is a bit more on the darker and creepier side. There were strange events that had me thinking ‘What the Hell’!
The writing was impeccable. I felt as if I was present as the events unfolded. It all seemed so real. The story was well paced and there was never a dull moment.


Onyx Webb (2) is the type of story that will stay with you as you eagerly await the next installment. If you want to be taken on a supernatural and mysterious ride, then you need to look no further. This series, which is highly addictive will give you that and more.

About Andrea Waltz and Richard Fenton 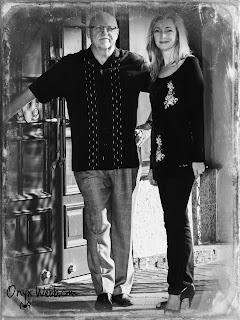 Richard Fenton & Andrea Waltz are a married writing team. Most well known for their business fables, they’re professional speakers who teach audiences on how to overcome fear of failure and rejection.  The Onyx Webb Series is their first serious dive into fiction. Richard and Andrea have been in love with creating stories together since they met almost twenty years ago and even spent some time in Hollywood writing screenplays, being represented by the producer of Breakfast at Tiffany’s. Their favorite genres are suspense, thriller, crime and anything of a paranormal nature which is how Onyx Webb turned into a mash-up of all their favorites!