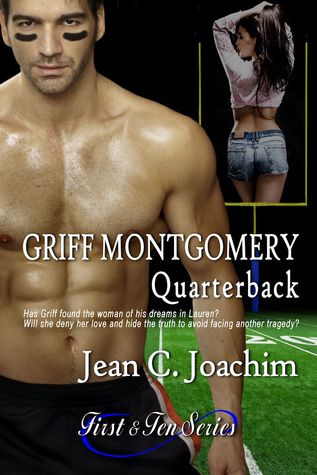 Two people, two tragedies, two deep, devastating secrets…. Griff Montgomery is the headline-making, heart-breaking star quarterback of the Kings – a 6’4”, 33 year old womanizer. Lauren Farraday is a beautiful young interior designer, bitterly scarred by divorce, whose life is falling apart. Though they violently oppose one another in court over her beloved pug (she thinks he’s arrogant and conceited, and he thinks she’s a bitch on wheels), something happens....
These are the bare bones of this sizzling romance, riddled with passion -- the first in a brand new series that’ll tantalize football fans and have readers glued to every page and on the edge of their seats!
Griff looks like a super hero with his tousled, mahogany hair, dazzling smile, dark, sexy eyes, and a body that does something indescribable to a tight pair of jeans. Though Lauren’s sworn off men forever, one look sends shivers down her spine, making her feel lonelier than ever before. Her lustrous, long hair, sparkling green eyes, and nonstop curves make his fingers tingle at the thought of touching her. How do they deal with their cataclysmic attraction? Will they be able to drop their protective facades – his to camouflage his grief over his sister and her family, for whom he was a surrogate father, moving 3000 miles away…. And hers’ to shield her from the incalculable loss of her husband and hoped for child?
For Griff, the thought of falling in love is as foreign as toe shoes and a tutu. For Lauren, it’s like putting on cleats and a helmet and running 50 yards…. Can they, will they, risk it?
CAUTION: This book contains locker room language.

I received a copy of this book in exchange for an honest review. The opinions expressed here are 100% my own.

Griff Montgomery- Quarterback is a fun, sexy and light-hearted romance. It had me laughing throughout most of the story. This story had the ingredients for a fun read. A hot hero, a sarcastic heroine, an adorable pug, humorous banter and drama to spice things up.

As the title suggests, the story is about a quarterback named Griff Montgomery.  He is the star quarterback for the Connecticut Kings and a notorious man-whore.  Never one to commit to a relationship, he now finds himself having a strong desire to having something more meaningful that his casual flings. This desire stemmed from the fact that he would no longer be a surrogate dad to his niece and nephew. He needed to fill the void that their moving had left but he had no idea where to start.  He decided to make some changes to his home as a means of dealing with their leaving.  In the process of making these changes, he found himself becoming the new owner of an adorable pug.  What he did not know was that finding the pug would bring about changes that would help him  fulfill his heart’s desire.

Lauren Farraday is going through an extremely rough time.  She is recently divorced, dealing with her father’s illness and trying to come to grips with the loss of her baby.  She has sworn off men and as such was not looking to get back into any form of a relationship.  Now to make matters worse, her ex-husband’s inhumane action has led to her sharing custody of her adorable pug with none other than Griff Montgomery. This is more than what one person can bear, however, she is determined to regain sole custody of her pug. What she did not count on was her growing feelings for the star quarterback.

Griff and Lauren were good for each other. She tamed him of his womanizing ways. He brought out her nurturing and helped her to feel alive again.  He helped her to realise that she was beautiful both inside and out.  Lauren is a strong woman. She had her troubles but she did not sit and wallow in self-pity. She was a survivor and I admired that about her.

I enjoyed Lauren and Griffs’ romance. The attraction between them was instant, however, I was glad to see that they took their time getting to know each other before proceeding to the intimate stage of their relationship. The sexual chemistry was intense and it was infused with humour. I found this aspect of the story quite entertaining.  However, just as things seem to be going well something happened that would test their love for each other. I didn’t particularly like this part of the story. Honestly, I felt it could have been done differently.  I am glad, however, that it all worked out in the end.

I was not fond of the secondary characters. They appeared shallow and did not bring anything to the story. It felt as if they were placed there to be a crutch for the main characters. There was not much substance to them.

Verdict:
This was a nice romance. It was a bit on the predictable side but it was still a good story. Recommended for fans of contemporary sports romance.