BOOK REVIEW: Saved by the Music by Kaithlin Shepherd 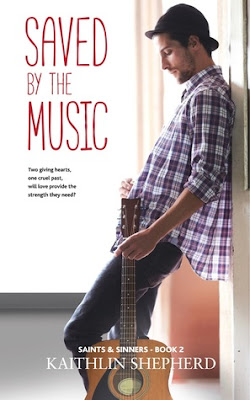 Sam Brooks, the musical genius behind international success Saints and Sinners, is battling a past few people know about. When their management suggest the band work with a consultant to launch a charity project, the last thing he expects is the wave of protectiveness he experiences when he starts working with Ashlee Daniels.

Ashlee Daniels loves working with charities but lately, she's been feeling the need for a change. The last thing she expects is an offer from Saints and Sinners. Hurt and betrayed more times than she cares to think about, she doesn't need the added complication of Sam Brooks

When Sam's past becomes his present, will their love be saved by the music?

“Saved by the Music” is an emotional story about love and healing. It was romantic, hot and heartwarming. It is the second book in the ‘Saint and Sinners” series and can be read as a standalone. However, I would recommend that you also read “Heart of the Music”
.
I first met Sam in “Heart of the Music”. I was intrigued by him and was glad to hear that his story would be next. I couldn’t wait to get my hands on a copy. (Thanks, Hot Tree Promotions). I liked him in book one, but by the time I completed this installment I was head over heels in love with him. Not only is he hot and sexy, he is humble, kind, caring and very protective of those he loves. This was evident in his interaction with his band members, Ashlee, and his mom. Sam is the kind of guy who is always looking to help others. He is a firm believer in paying it forward. Someone had looked out for him and saved him from a life of destruction. To show his gratitude he got involved in charities where he could provide financial as well as emotional support to kids who came from abusive homes or who were abandoned by their parents. Despite all of this he was still not fulfilled as the one thing he desired, he did not have and that was someone to complete him. He honestly believed that he did not deserve such happiness. However, when he got the chance to work alongside the woman that he was attracted to from the first time he met her, he realised that this was time for him to go after what he wanted. However, someone from his past was intent on dismantling everything he worked to achieve.

Ashlee Daniels is a consultant who works with philanthropists and non-profit entities. Her specialty is non-profit start-ups, program development, and campaign planning. This made her the perfect person to help the members of the Saint and Sinners band launch their charity project. She was glad to take on the task as she needed the additional funds to help ease her mounting financial burdens. However, being the consummate professional she feared that being in such close proximity to the one man who could get her hot and bothered by just a mere look would lead to career suicide. Would she be able to work alongside him and maintain her objectivity or will she succumb to her innermost desires?

Ashlee is hardworking, kind, independent and proud. She chooses to shoulder her burdens on her own as she hates asking for help. I loved how she was there for her mom. She made so many sacrifices for her which made me appreciate her even more. It was evident that she had a big heart. It’s understandable why Sam was so taken with her.

The romance between Sam and Ashlee was not without its obstacles. Ashlee was having a tug of war with her feelings, while Sam’s past threatens to derail their budding romance. I thought they were great together and found myself rooting for them and hoping that their love for each other would triumph.

The story was well written and I found it to be engaging and entertaining. This installment was very emotional in comparison to “Heart of the Music”. I can’t wait to see what is in store for the remaining band members.