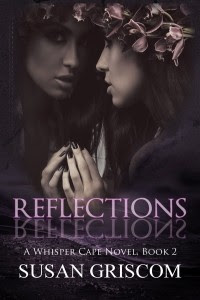 Murder and mystery befall the sleepy town of Whisper Cape once again, creating suspicion and betrayal around every corner…
Gerry has loved Maia from the very first moment he laid eyes on her. Now that she's pregnant with his child, he's over the moon with happiness. Likewise, Maia is overjoyed about having a baby with the man she loves.

But when she starts seeing and hearing visions of an old woman who warns her about the pregnancy, Maia starts to think she is losing her mind. Unfortunately, her nightmare has only just begun. A talented up-and-coming rock band has come to town to play at Gerry's bar, and the beautiful and seductive lead singer has her sights set on Gerry, determined to rekindle an old flame. Despite their history, Gerry wants nothing to do with Careen, but she doesn't like to be told no.


Between her interference and the secrets and lies abundant in Whisper Cape, a love once considered invincible begins to crumble and fall apart. Will Maia and Gerry get the happily ever after they so desire?

REFLECTIONS by Susan Griscom is book 2 in the Whisper Cape series. It picks up where book one left off, but in this instance, the focus is on Maia and Gerry's relationship. This series has to be read in order, as failure to do so would leave readers confused.

I enjoyed book one and was looking forward to the journey in book 2. The author did not disappoint as the story met my expectations. I personally thought it was better than its predecessor. The only problem I had with this installment was the ending which left me wanting more. I am not a big fan of , however, my consolation is that book 3 is available, so I don't have long to wait to find out how events will eventually unfold.

I was first introduced to Maia and Gerry in book one. I was intrigued by them and was happy to discover that I would be learning more about them in this installment. Maia is pregnant with twins. She is happy yet terrified, which is due to the risks that she faces from the pregnancy. Added to this she has to be dealing with feelings of jealousy and insecurities as it relates to Gerry's ex-girlfriend, who is determined at all cost to win him back. This is more than any woman can manage. However, Maia the strong woman that she is did not allow the fear and feelings of insecurities and jealousy to dominate her life.

When I had first met Gerry I did not trust him. However, I came to that his main fault was his tendency to be overprotective, which came off as a bit overbearing at times. In this installment, I learned about his past and the events that shaped him into the man he became. The reappearance of his ex-girlfriend was a shocker, but he was determined that she would not destroy what he had with Maia.

I liked the interaction between Maia and Gerry. It was easy to relate to the experiences and issues they encountered on a daily basis. I enjoyed the world of fantasy that the author created and I loved how she accurately linked the title with events in the story.

New characters were added to the mix which made things rather interesting. The story was engaging and I found it difficult to put down. The story dealt with the issue of jealousies and secrets. It had the perfect blend of mystery, romance, and drama.

This was a wonderful addition to the series and I can't wait to see what book three has to offer.