GUEST POST by CARL SCHMIDT author of DEAD DOWN EAST 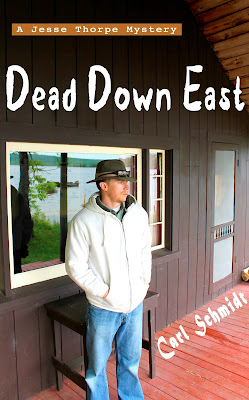 Dead Down East, a fictional murder mystery, is both detective noir and smart screwball comedy rolled into one. Jesse Thorpe, a young private investigator operating out of Augusta, Maine, receives a mysterious phone call from a former client, Cynthia Dumais.  She begs to be rescued from an island south of Brunswick, within a mile of where William Lavoilette, the governor or Maine, was assassinated the night before. She insists that her life is in danger, but is unwilling to provide any further information. Reluctantly, Jesse goes to fetch her.

Within a week, Jesse has three separate clients, each with his, or her, own desperate need to have the murder solved. He assembles a motley team of compadres, including rock band members, a tie-dye psychic and his rousing girlfriend, Angele Boucher, to help him with the case. While the FBI and the Maine State Police investigate political motives, Jesse looks for the woman—Cherchez la Femme—as the trail draws him through the lives, and DNA, of the governor’s former mistresses.

Fresh, witty and loaded with eccentric characters, this first novel in the Jesse Thorpe Mystery Series is both clever and stylish. It’s an old-school private eye tale with inventive twists and local charm. If you enjoy a well-crafted and zesty narrative, lively banter, or take pleasure in the company of Mainers, you’ll love Dead Down East.

Writing With Humor
(by Carl Schmidt)

I’ve been sitting at my word processor for nearly an hour, alternately squirming in my chair, rubbing the back of my neck and watching the clock, hoping that somehow, some way, the Great God of Mirth will sidle up and whisper to me the secret of writing with humor—so that I can reveal it to you. After all, that’s my topic.
I’m not really sure how to proceed, but I’m not flustered; I’m pacing myself. And what’s more, I lied about it being an hour; it’s only been ten minutes…so far.
The problem with writing about humor is that the reader is geared up to be amused. This, more or less, puts the writer on the spot. It won’t be good enough to Google the topic and paste up the seven secrets of comedy writing. I read them already, and they didn’t make me laugh. People don’t laugh while they’re analyzing. To paraphrase Cyndi Lauper, “People just want to have fun.” And besides, if I cut and paste all seven, I’ll get nailed for plagiarism. So I won’t go there. My mission is to make you laugh.
Now… Fear of failure has always been a great motivator for me. So I’ll get myself going with a pep talk. Picture a manic, red-faced football coach at halftime with his team down by twenty-one points, and I’m the quarterback:

“OK, wise guy,” coach Ditka yells, looking me right in the eye. “You want to sell your book, right? Then you’d better get off your duff and find a way to be funny. Fake it if you have to, but I want to hear a chuckle in the third quarter. Otherwise, the reader will figure out that you don’t know what the hell you’re talking about, and what’s more, she’ll be pissed.”

Jesse Thorpe is the narrator/private detective of my mystery novel, Dead Down East. Jesse has a cheeky sense of humor, which he allows to leak out now and again, not just because he likes to have fun, but also to maintain calm when things get perilous. The first really dicey moment for him occurs in the middle of chapter four, as he is trying to worm his way through an FBI roadblock. In the first draft, I had chosen that moment to insert a rather lengthy internal monologue, to expose the witty side of Jesse’s nature. I was having so much fun with it that by the time I was done, it was almost fifteen hundred words long. And while I liked the tension it created by suspending the dramatic moment in mid-air—for several pages—eventually I decided that it would be more effective as a prologue for the book. This way, on the very first page, the reader gets a preview of the inner workings of Jesse’s mind, a snapshot of his modus operandi and a quick peak at his girlfriend.
What follows are the first two paragraphs of that prologue. I hope it serves to demonstrate the use of humor in writing, and, most of all, I hope it tickles your funny bone.

Apologies and compliments are two remarkably effective devices for disarming adversaries in life and hecklers in bars. If you consider the socially adept people you know, you’ll see that they use these two conversational tools frequently and with ease. I remember the first time it fully dawned on me how valuable they could be.
Angele and I had been dating for a couple of weeks. Our next planned event was scheduled for Saturday night. So I was a bit surprised when she arrived unexpectedly at my place on Tuesday evening. I guess she decided that there was something that couldn’t wait until the weekend. The moment she walked through the front door, I began to suspect what that “something” was. She had a gleam in her eyes that seared me from the inside of my nimble imagination right down to my insteps. I surmised that she was either ovulating, or she had a sudden urge for a tour of the Thorpe habitat. I began to mentally review the floor plan of the house. “Now, where is my bedroom?” I thought. “I know it was here this morning.” 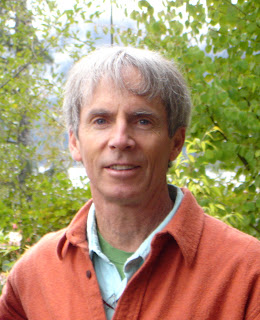 Carl Schmidt graduated from Denver University with a degree in mathematics and physics. As a Woodrow Wilson Fellow he studied mathematics at Brown University.

Carl lived and traveled widely throughout Asia for seven years, including two years as a Peace Corps volunteer in the Philippines and five years in Japan, where he taught English.

Carl has spent dozens of summers in Maine, on lakes and in the woods. He chose it as the setting for this novel because he loves its rugged natural beauty and the charming idiosyncrasies of Mainers. He has also written and recorded three musical albums. This, along with his formal education, proved invaluable when molding the persona and voice of Jesse Thorpe, the narrator of Dead Down East, and endowing him with both a creative eye for detail and a sense of humor.

Dead Down East is the first novel in the Jesse Thorpe Mystery Series, which includes A Priestly Affair and Redbone.  In 2001, New Falcon Press published his non-fictional book, A Recipe for Bliss: Kriya Yoga for a New Millennium.

Currently, he is a freelance writer living in Sedona, Arizona with his lovely wife, Holly, and their faithful German shorthaired pointer, Alize.