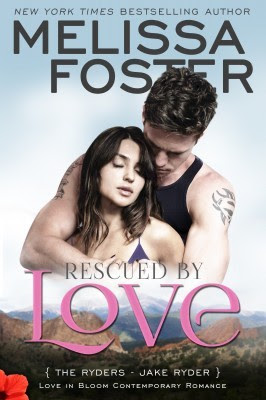 The Ryders are a series of stand-alone romances that may also be enjoyed as part of the larger Love in Bloom series.

Addison Dahl is excited to return to Elpitha Island for her best friend Gabriella’s wedding. A weekend of sun and fun is just what she needs before setting out on her newest adventure—roughing it in the wilderness. Addison is tough, she’s independent, and she doesn’t “do” feelings toward men. But lately her friend—and Gabriella’s brother-in-law—sinfully sexy and ornery-as-hell Jake Ryder has been the star of her late-night fantasies, and she can’t get him out of her mind. It doesn’t help that the chemistry between them is scorching hot. With any luck, a few days in the wilderness will snap that craziness out of her head.

As a top search and rescue professional, Jake Ryder spends his days saving those in need and his nights in the arms of willing women who offer nothing more than a few hours of sexual enjoyment. But there’s only one woman he wants, and he’s spent the last several months trying to get beautiful, smart, and sassy Addison to give him one sinful night. He’s sure one night will lead to more.

The night of the wedding the heat between Jake and Addy ignites, and they’re powerless to resist their explosive passion. Wild kisses, sensual touches, and heartfelt conversations them closer together, and when the weekend ends, Jake is determined to keep Addy close and make her his. But Addy has other plans...

Writing this review proved a difficult task. Why? After reading Chased by Love, which I loved, I was looking forward to reading Rescued by Love so much so, that I chose to read on the weekend when I would have little or no interruptions. I wanted to every moment, but unfortunately, things did not go as planned.


I had a difficult time getting into the story, which is a first for me where the author is concerned. The story was slow to the point that it felt like it was not going anywhere. It was not until about the last 30% that the story picked up.

Developing a connection with the main characters was difficult. Addison had an unhappy childhood even though she lived a privileged life. As an adult, she was determined to prove that she was able to survive without her trust fund. She considered love to be over-rated and denied that she needed it in her life. To prove her theory, she never slept with the same man more than once. Personally, I believed her actions reeked of self-loathing. Initially, I understood her need to be independent, but after some time her actions became frustrating. She refused to accept help when offered for fear it may rob her of her independence. Seriously! That only highlighted her insecurities and her selfishness.


I was not sure what to make of Jake. It was evident that he was a hot, sexy, alpha male with a stubborn streak a mile long, but that was as far as it went. His backstory was severely lacking, which made him an character.


The romance did nothing for me. Addison spent most of the time that they were together, denying her feelings. They got involved with each other without knowing much about one another. Their connection was more sexual than emotional.

Did I enjoy this installment? : Somewhat.

Would I continue the series? : Most definitely.

Would I recommend this title? Yes! Not every reader has the same taste, and what I find to be mediocre, may be top notch for someone else.

This story was my least of the series.

I received this book from the author, which has in no way influenced my voluntary review. No other compensation was given and all opinions are my own***