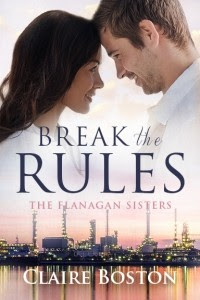 
Bridget Flanagan knows how to assess risks, but are the consequences of exposing her heart too dangerous? Bridget has a passion for safety and in the world of oil refineries that makes her great at her job. So when her big promotion goes to someone else, she heads out on the town to forget her troubles. Jack Gibbs seems like the perfect man to distract her.

At least until Monday morning when she discovers Jack is her new boss. There's no way she's going to keep seeing him, no matter the connection between them. She's been burned before.

Jack can't understand why Bridget's so against their relationship. They positively sizzled during their one night together. He knows he has to be careful now she reports to him, but she tempts him in every way.

Can Jack convince Bridget to give him a chance, or is the risk too high?

When I discovered that Claire Boston wrote this book, I silently wished that I would be able to get my hands on a copy. Imagine my surprise when I discovered that it was available for request through The Romance Review, I immediately jumped at the chance to get a copy for review. You are probably wondering why I was so excited. Well, after reading Into the Fire, which I enjoyed, I figured, especially after reading the synopsis, that this would a good read. It proved me right; I enjoyed every moment spent reading this installment.

The premise is intriguing. The protagonists, Bridget and Jack, met in a nightclub. They immediately hit it off. Jack, after spending three years in Australia, recently returned to Texas, due to a lucrative job opportunity that he could not resist. Bridget is not in a good place. The promotion she was hoping for never , and to add insult to injury, an outsider got the position over her. Having been burned by a previous relationship, she threw herself into her job, which proved to be a waste of time. Therefore, meeting Jack at a time when she felt unworthy seemed like the best thing that could have happened to her.

Bridget is a person who lived by the rules and she had specific ones when it came to dating--never sleep with a man on the first date and do not date a co-worker. When she met Jack she was willing to break the first rule, little did she know that this would lead to her breaking the second rule.

The characters are relatable and realistic. The issues are a replica of real life. Bridget is a responsible person who took life seriously. For her, it was all work and she hardly spent time having fun. She is caring, selfless, determined, industrious, dedicated and passionate. Jack is a lovable person. He liked and respected Bridget. He understood her fears and even though it did not help his case, he did not try to push her. However, keeping to her was not easy as circumstances kept putting them together outside of the work environment. Compromise is the name of the game in this situation. Would breaking her rules bring happiness or will it end in heartache?

The dialogue between the characters is funny and engaging. I especially loved the dialogue between the protagonists as well as their interaction with their families. I did not particularly like Bridget's best friend. She is willing to manipulate anyone to get what she wants, it did not matter who got hurt in the process.

This is a beautiful love story loaded with lots of sexual tension due to its forbidden nature. The writing is solid; it held me captive throughout the entire story. I liked that it did not focus solely on the romance between Jack and Bridget. It spoke also the discrimination that women face while working in an environment dominated by men and safety in the workplace. Sadly, these issues still plague our society, even after years of fighting for equality and the well-being of employees.

Verdict:
A great start to the series, and one which I recommend. I cannot wait to get my hands on the next book in the series.

I received this book from the author via The Romance Review, I have volunteered to share my review and all the opinions are 100% my own.