BOOK REVIEW: UNDER HER SKIN by ADRIANA ANDERS 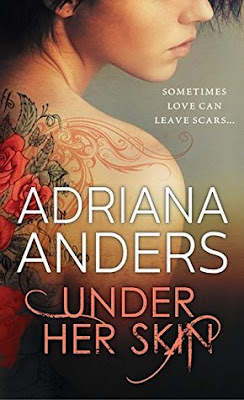 
Her Body is His Canvas

A darkly possessive relationship has left Uma alone and on the run. Beneath her drab clothing, she hides a terrible secret—proof of her abuse, tattooed onto her skin in a lurid reminder of everything she’s survived.

Caught between a brutal past and an uncertain future, Uma’s reluctant to bare herself to anyonemuch less a rough ex-con whose rage drives him in ways she will never understand. But beneath his frightening exterior, Ivan is gentle. Warm. Compassionate. And just as determined to heal Uma’s broken heart as he is to destroy the monster who left his mark scrawled across the delicate tapestry of her skin.

Now and then, I come across a book that tests my boundaries and forces me to re-think my views on controversial and hard-hitting topics.  “Under Her Skin” was one such book.   the moment, I read the blurb I knew this would be an interesting read and so I was glad when Netgalley approved my request.

Not only is the story an emotional read, it is also thought-provoking. I know that this story is likely to be a trigger for persons who have been in a similar position.  This story was a vivid reminder that some women may find themselves in a relationship that proves to be toxic both mentally and physically.  At times, they find excuses to justify their reasons for remaining in such a relationship. Some of these same women will look deep within themselves to find the courage to escape such a situation and take back their lives. This is a story about one such woman.

Uma was in a relationship with a powerful man. When they first met, he was as charming as ever, but that all changed as their relationship progressed.  The signs were there, but she stuck it out believing that things would change. Unfortunately, that was not the case, things went downhill and before she knew it, she was running for her life.

The story started slow and it maintained that pace to the end. Although the pacing was slow, the story was not boring.  The pacing was perfect for this kind of story. This is the kind of story that deserves to be and not rushed.

This is not a sweet and flowery romance. It is a story about two broken souls finding love when they least expect it. Uma is running for her life and getting close to anyone, especially a man was not on her list of priorities.  What she never expected to encounter was the brooding and who would become her lifeline in her journey of reclaiming her life.

From the moment Ivan laid eyes on Uma, he knew she was a victim of abuse having experienced it first-hand. He wanted to help, but this would prove challenging, as she was afraid to put her trust in him, which is understandable given her history.  She would soon come to that he is nothing like her ex-fiancée but, that did stop her from being wary. He helped her that she need not be afraid. He gave her hope. This reminded me that a relationship with the right person could be a wonderful and powerful experience.

Their interaction was poignant. The author’s portrayal of Uma and Ivan made it easy to establish a connection with them.  I felt every emotion that they experienced.  I enjoyed watching Uma overcome her fears and regain her confidence.  They helped each other in their healing process.

I enjoyed the romance, which did not take place until around the second half of the story. It moved slowly, which was a good thing for them both. Her need for control in this was understandable and I loved that Ivan allowed her to take charge.

The supporting characters were diverse, some were likeable and some not so much. The one that peaked my interest was Uma’s new employer. At first, her was mean, but beneath all that, meanness laid a soul that has had its share of pain. I loved that Uma stood up to her making their interaction entertaining.


Verdict:
Under Her Skin is everything I expected it to be. It is an unforgettable story about love, hope, and healing. I enjoyed every moment of this powerful, emotional and thought-provoking read and I am looking forward to reading the next book in the series.

NB: This can be read as a stand-alone.

I received this book from the publisher via Netgalley, I have volunteered to share my review and all the opinions are 100% my own.