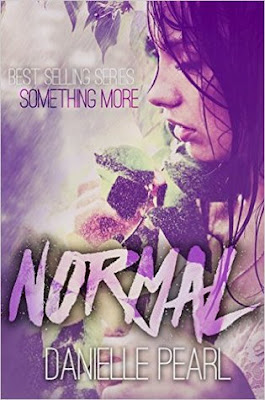 It's the kind of situation most people would dread. Starting at a new high school, in the middle of my senior year, in a new town, in a new state. I know no one. No one knows me. That's what I'm counting on.

A year ago, Aurora "Rory" Pine just a normal teenage girl - just as sweet and naive as the fairy tale princess she was named after.

But this a year ago.

Rory is broken, and now suffering from a debilitating anxiety disorder, wrought with precarious triggers, she moves across the country to escape the source of her troubles. Her plan is anonymity, but that's easier said than achieved for the new girl having a panic episode outside of calculus. The worst part? There's a witness - and a gorgeous one at that.

Sam is a walking trigger for Rory. Incredibly handsome, built like the star obviously is, and undoubtedly popular, Sam outwardly represents everything Rory despises about high school. But as the fates keep throwing them together, a connection sparks that neither ever expected, and certainly couldn't ignore.

But Sam has issues too, and Rory's past won't just stay in the damned past. When friendship evolves into something deeper, can a girl utterly destroyed by the worst kind of betrayal and a boy battling demons his own ever have a normal relationship? Is that even what they want? Find out in NORMAL, a gritty story of trust and abuse, heartbreak and salvation, and if they're lucky - love. This is not a flowery romance - not for the faint of heart.

'Normal’ by Danielle Pearl was anything but normal. It completely blew me away. It was inspiring and heartbreaking. It was nothing like I expected, but what it delivered was all I hoped for and more. I believe that every female, adult, should read this book. This is the type of story that will stay with you days after you have finished reading. It is a story of one girl’s desire to get her life back to normal. It will break your heart into tiny pieces.

Now and again, I come across characters that are inspiring and make my reading experience worthwhile. Rory is one such character. She is and it helped that I got the story from her POV. Seeing the story through her eyes helped me to understand her emotional turmoil. I admired her strength in conquering her demons. She may not have seen it, but it was there. I could not fathom all she had been through, but one thing I knew is that she was a survivor. Her desire to get her life back to normal was a perfect demonstration of her survival skills. The pain, the grief and struggles she faced daily were heart-wrenching, but watching her overcome them one day at a time was inspiring. I know there are persons who would be quick to judge her, thinking that she made poor choices, and as a result placed herself in her current position. In addition, some may believe that because she lived in the electronic age, she should not have made those choices, but I consider that as sheer rubbish. I have that it is easy for persons who have never been in the situation to pass judgement, but until they are in the position, they will never truly understand. Yeah, her actions may seem frustrating, but who are we to judge?

The highlight of this story was that Rory did not have to fight her battles on her own. Rory had trust issues when it came to the opposite sex, so meeting Sam and becoming his friend was a life altering experience. I appreciated how he treated her. At no time did he judge her. He was patient and gentle with her, even when her bordered on erratic. He was just what she needed. Thanks to him, she was taking charge of her life and finally living again. He showed her what it meant to enjoy life and helped her acknowledge that she was a survivor.

‘Normal’ is a well-written story that took me on an emotional journey, which I may not recover from anytime soon. There were times I found myself putting the book down so that I could absorb the events, as they were intense and overwhelming. The story was well- developed, captivating and the pace fitting. It moved between the past and the present, thus providing readers with insight into Rory’s life and the events that led to her current state. There was some repetition, which was due in part, to how the story was presented.

My advice to you is, read this book. However, do not expect a sweet and fluffy story. It is definitely not a story for the faint of heart. It touches on sensitive issues of abuse and assault so if this is a trigger, then this is not for you. However, if these issues do not bother you, and you take my advice be ready for an intense and emotional journey.

I received this book from the author via Quirky Blind Date. My review is voluntary and no other compensation was given. All opinions expressed are my own***