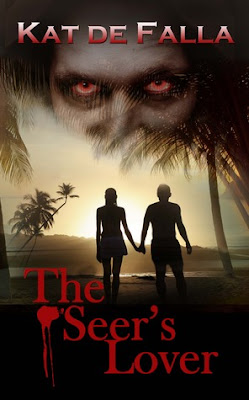 
For years, Calise Rowe has been able to sense unusual energy from people, making her believe she is different. Pulled into an ancient war raging for centuries between demon hunters and seers, she's about to find out she's right.

Her search for the truth leads her to Lucas Rojas, a seer of angels and demons who walk the earth shrouded from normal human eyes. He's hidden his gift for years and refuses to endanger Calise by sharing it with her.

In the sultry Costa Rican Jungles, their worlds collide. As their passion and desire ignite, so does the ancient war between demons and seers. Will their combined efforts be enough to save themselves and the entire human world, or will their new found love be their downfall?

The Seer’s Lover has been on my TBR for some time, but I did not get the chance to read it before now. My reasons for purchasing this title at the time was twofold.  I chose to read this book based on the synopsis and the cover, which I found eerie.  I had no experience with the with the author’s work, but because this was a story about the supernatural world, I expected to have a great time.

What is the book about?
Rowe, a pharmacist, has the ability to sense unusual energy from persons she comes in contact with. She did not understand what it meant and questions went unanswered.   However, she would discover the true meaning behind her abilities, when she inadvertently exposed herself to a demon and was saved by a stranger. The stranger directs her to travel to Costa she would find the answers she desperately seeks.
Lucas Rojas is a seer, with the ability to see demons and angels who walk among humans. He comes from a long line of seers, dating as far back as to the time of the Messiah. He has kept his abilities secret because his kind has been hunted by demons whose intent was to obliterate their lineage.

What I enjoyed.
The story introduces readers to a world where demonic forces desire to control humans  where angels protect humans from the wrath of these and seers whose job it is to destroy these evil forces. The beginning was intriguing which, made me eager to uncover the secrets that lay between the pages.

I found the fight scenes between Lucas and the demons exciting and exhilarating. I thought these scenes were well written.  The author provided detailed descriptions as it relates to these me to every action that took place at this point.

I enjoyed the way the author conveyed her feelings into the story. Her ability to keep me engaged was on par for the most part. I thought the word building was good. The pacing was good. with the writing helped me to get through the story.

The issues I had.

Unfortunately, I had a hard time connecting with the characters. None of them elicited any emotion within me.   Have you ever been to an event where you encounter a group of people whom you have never met, but for some reason, their actions prevent you from wanting to get to know them and you can’t wait to leave? to say this is how I felt about the characters in this book.  My least character was Shane, Calise’s ex-boyfriend. I found him to be weak and pathetic.  His relationship with Calise ended a long time, but he was still obsessing to the point where he became unstable.

The romance between Lucas and Calise lacked credibility.  First, it was an -love connection and second at no time did I see where their feelings for each other were allowed to develop. They never got time to know each other, before declaring their love for each other. As a result, I was unable to connect with them as a couple.

The story felt a bit disjointed in some areas.  The movement between scenes in some areas did not flow resulting in it appearing unreal.  Then there were the many unanswered questions that I was left with at the end of the story.  I am still trying to figure out what happened.  I am wondering if the answers are in book two, but I am not sure if I am keen to venture there.

Verdict
This book had potential, but it did not work for me. However, even though it didn’t work for me, don’t be discouraged from giving this book a try. If you enjoy paranormal stories about angels and demons and don’t mind -love connections, you will love this book