Ever since I read Run to the Ground, I was eager to learn more about the secondary characters.  Therefore, when I learned the sequel, On the Chase, would be Hugh’s story I was excited.  My excitement further increased when the publisher offered me an eArc in exchange for an honest review.
What The Story is About.
Kaylee Palmer is happy and contented with how her life has unfolded. She had a great job, a perfect boyfriend and a comfortable life. Then the unthinkable happened. All it took for her life to come crumbling down was the witnessing of a gruesome scene.  Trusting law enforcement was not an option, therefore forcing her to move to Colorado and assuming a new identity.  Keeping a low profile would be easy if it were not for the attractive K9 officer Hugh Murdoch.
Hugh Murdoch is on medical leave, after suffering a serious on the job injury. He is itching to get back in the field, but his constant interference in ongoing cases, when he should be resting, is driving his colleagues crazy.  When he met Grace, he believed she was hiding something, and he is determined to uncover her mysteries.
What I Thought
The Characters.
Hugh is funny, caring, hardworking, determined and charming. Although sometimes he crossed the line with his lock picking skills. It was hard not to like him even though he was annoying at times, to which his friends and Grace could attest. He kept me laughing for most of the story. It would seem he does not take things seriously, but that was far from the truth. He if all round fun-loving person.
Kaylee/Grace is brave, funny, caring.  I took a while to warm up to her, but as the story unfolded, she grew on me.  I understood her reaction (not that I was in agreement) to the new life she had to assume. After working so hard for her achievements, only to go back to living the life she thought she had escaped.
The Romance
I enjoyed the interaction between Hugh and Grace, which was filled with humour, banter and passion. Their chemistry was undeniable, and I enjoyed watching them trying to work out their feelings for each other.
The Suspense
The story packed full of action and suspense that made for a page turning read.  The danger they faced had me holding my breath at page turn.
The Supporting Characters
We received updates on the lives of the characters from the previous installment. Jules siblings are so adorable and the romance between her and Theo is as strong as ever.  I enjoyed the bond of friendship, which existed between Hugh, Theo and Otto. They were a great team, and it is evident they cared deeply for each other.
The Story
I had questions regarding the scene Grace/Kaylee witnessed. I was hoping for more information especially as it relates to the victims and their identity. Were they innocent parties or were they criminal elements?
Conclusion/Recommendation
I thought this was a great addition to the series and I am eager to have Otto’s story. If you are a fan of small town romances filled with suspense and non-stop action, then you should try this series. 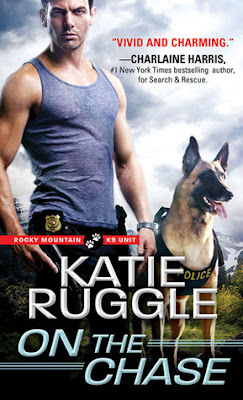 Injured in the line of duty,
His orders are simple:
Stay alive.
But when a frightened woman bursts into his life, Hugh and his K9 companion have no choice but to risk everything to keep her safe.

The sole witness to a horrific crime, Kaylee Ramay flees to the Colorado Rockies to start a new life. There she becomes Grace, a dog kennel employee desperately trying to avoid attention—especially from dangerously attractive K9 Officer Hugh Murdoch.

Because Hugh is tall, dark… and nothing but trouble.

Hugh is anxious to get back in the field after an act of heroism left him warming the bench. Until then, he and his K9 partner Lexi spend their hours teasing the town’s mysterious newcomer. But when their simmering attraction is nearly cut short by a sniper’s bullet, Hugh’s mystery woman must come clean about the secrets she keeps…

Or both of them will pay the price.