BOOK REVIEW: SCREAM FOR ME by CYNTHIA EDEN @cynthiaeden #RomanticSuspense

I received Scream for Me on its release day to review. Unfortunately, due to school and exams it got pushed back until eventually it was forgotten.  I decided at the start of the year to read a few of the forgotten books from my review list and Scream for Me made the cut. I read the first two books (Kill for Me and Fear for Me) in the series years ago. I remembered enjoying them both so I had high expectations for the final book and Ms. Eden did not disappoint.

Dr. Cadence Hollow and Kyle McKenzie, FBI agents are the main stars in this romantic suspense. They are partners who have made every attempt to maintain a professional relationship but their attraction to each other made this difficult.

Kyle’s turmoil in solving the case leapt off the pages. His sister is a victim and not knowing if she is alive after fifteen years took its toll.  I felt every moment of his stress, which was further intensified when Cadence placed herself in harm’s way to try to trap the villain. I felt for him, it could not be easy not knowing what happened to his sister. This feeling of helplessness proved overwhelming.

Cadence and Kyle worked well together and were perfect for each other. She helped keep him calm; However, I didn’t like how she dug into his past without his knowledge but was not willing to share her secrets. She had her share of nightmare, stemming from past trauma.
The prologue intrigued me and had me curious about the rest of the story. The villain is one sick creep. For him it is all about control, which was clear with his latest victim. He thought himself superior, which was evident from the way he chose his victims, who were docile and easy to control. He is always one-step ahead of the FBI; will Kyle and Cadence find her in time?

The story started out slow, but built up as it progressed. The romance took a back seat, but I had no issues with this as the suspense had me on the edge of my seat.  Figuring out the killer’s identity proved a difficult task, but one thing was clear it was someone Kyle knew.  The perp’s obsession with Kyle bordered on manic.  I do not want to go into much detail regarding the perp, but one thing I can say is, he is smart and had everyone fooled.

Twists and turns within the story made for some interesting moments.  Just when they thought they got a break in the case the investigators are led down another road.

Conclusion/Recommendation
I enjoyed this final installment in the Fear Me series. Exciting and suspenseful, it had me flipping the pages as I had to know who is responsible for the disappearance of these women and if Kyle would get closure. I am glad I finally got the chance to read this installment.

I would recommend this series to fans of romantic suspense. Although this can be read as a standalone, I would suggest the series be read in order. 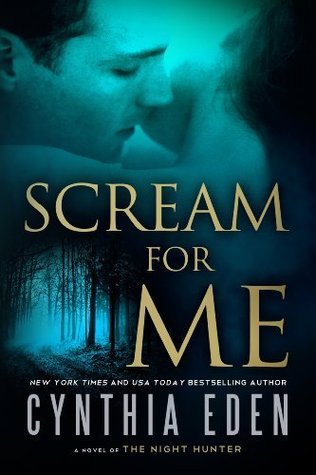 They were only supposed to have a professional relationship, but FBI agent Kyle McKenzie has been fantasizing about his sexy partner, Cadence Hollow, from the moment they first met. It takes the darkest case of their careers to finally bring their hidden desire bubbling to the surface. Once they’re in each other’s arms, though, they swear that nothing short of death will part them. The Night Hunter—a cunning stalker whose four-state, fifteen-year abduction spree began in Paradox, Alabama, with Kyle’s sister—may be only too happy to oblige.

In the small town, Kyle must confront the painful past he’s been hiding from Cadence. Kyle vows to put the Hunter behind bars…or in the ground. But the one thing that obsesses Kyle more than his sister’s grim fate—his furious love for Cadence—is the weapon the Hunter will use to lure his pursuers into the mouth of a murderous trap.
4 stars Blogger Shame COYER Winter Cynthia Eden Fear Me series Review Romantic Suspense