I enjoyed this latest offering from Mark Nolan and once again, I got to spend time with Jake and his dog Cody.

Jake received his law degree and is now a practicing lawyer. He believed he could now abandon his life as an assassin and focus on his law career. However, he would learn that leaving this life behind would not be easy, has trouble always comes knocking. Whether it was through missions for the CIA or from someone who may have a beef with him. In addition, he faces the prospect of his relationship with Sarah ending has she feared that his line of work placed both him and his loved ones in danger.

Meanwhile, a deranged killer, dubbed the Random Killer because of his MO, is on the loose. The killer came on Jake’s radar when he murdered his neighbour and friend and attempted to frame him. Jake has taken it upon himself to hunt him and bring him to justice.
His decision to track the Random Killer would place him in the killer’s crosshairs placing himself and those in danger.

Once again, Cody stole the show.  I just love that dog. Protective, loyal, intelligent and adorable. Jake is not bad himself 😉. I can see why Sarah struggled with her decision of whether to stay with him despite considering the fact danger follows him everywhere.

Fast-paced and action packed, Killer Lawyer, had me on the edge of seat. The villain was one scary dude. The fact that you had no idea when and where he would strike and who his next victim would be, added to the intensity of the story. This was not an easy book to put down. I had to know how Jake would deal with this latest threat. Unlike the previous installments, the action scenes were more realistic and did not appear over the top.

I loved how the author blended the emotional and suspenseful aspects of the story. A particular scene almost brought me to tears. I am happy things worked out.

I found the characters authentic and relatable.
I had fun reconnecting with characters from the previous installment and meeting new ones. I enjoyed the camaraderie Jake shared with his friends, but the relationship, which stood out, was the one he shared with Cody. These two were in tune with each other. They knew when the other faced danger and would die protecting each other.

Although I enjoyed this latest installment, I found the tying up of the story as it relates to the serial killer anticlimactic. I cannot go into details, because to do so would result in spoilers.

Conclusion/Recommendation
I would recommend this latest installment to fans of thrillers. This is one of those stories where the outcome is not what you expected. Overall, a great read and I am looking forward to the next book.

"Killer Lawyer is filled with action and suspense on every page. It will take you on a thrilling ride that will have the old adrenaline pumping wanting more."


"This book grabbed my attention from the beginning and held me hostage until the last page was read."


"If you're looking for a great page turner that will keep you guessing with lots of twists and turns look no further."

Above reviews from Amazon 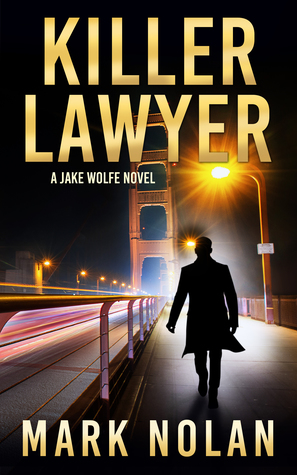 Attorney by day, assassin by night.

Jake Wolfe is a young lawyer who leads a secret life as a government assassin. Trained by the CIA, Jake now wants a new life of peace and quiet, living on a boat and practicing law. But when his city is shocked by a serial killer and he’s framed for the murder of a friend, Jake must race against time to find the killer before he strikes again.

Drawn into a deadly game of cat and mouse; at every step Jake and his loved ones are being hunted by the clever, twisted madman. As the city is gripped in fear of the seemingly random shootings that could strike anybody, Jake investigates and uncovers ominous clues until a shocking reversal of fortune changes everything.

With the clock ticking and lives at stake, will Jake be able to find and stop the killer in time, or will he become the next victim?

Buckle up for a wild ride as Jake Wolfe and his exceptionally intelligent dog, Cody, return to action in this page-turning thriller in Mark Nolan’s bestselling series that has earned thousands of 5-star ratings on Amazon and Goodreads.

A mysterious killer who calls himself The Artist is assassinating wealthy lawyers in San Francisco. When war veteran Jake Wolfe accidentally takes his picture during a murder, The Artist adds Jake to his kill list and he becomes a target in a deadly game of cat and mouse that only one of them can survive. How far would you go to protect your loved ones from a killer? Jake wants to leave his top secret, violent past life behind him. But the reluctant, flawed hero can't ignore his duty and his personal moral compass.
This gripping thriller is full of suspense, plot twists and surprises. It features a cast of interesting characters, including several strong-willed women, two wise-cracking San Francisco Police Homicide Inspectors, one highly intelligent dog, and a philosophical killer who shares Jake's admiration for Van Gogh paintings but still plans to kill him anyway. As Jake gets closer to unraveling a merciless conspiracy, his life gets turned upside down and the danger level increases, adding to the growing suspense. This entertaining page-turner starts out as a murder mystery and then shifts gears into a high-speed action thriller that takes you on a roller-coaster ride to the riveting ending. A good read for those who enjoy mysteries, suspense, action and adventure, vigilante justice, unique characters, witty dialogue and a little romance too. Now on sale in over a dozen countries around the world. Be the first among your friends to read it.
Fans of Kindle Unlimited novels will be happy to know this book is one of the best financial thrillers in kindle unlimited books.
Available to buy from....

Every marriage has a secret, but this one is deadly. Lauren Stephens wakes up to find her husband, Gene, has vanished during the night. His phone is dead. Desperate, she hires Jake Wolfe and his war dog, Cody. They search the house and discover something so disturbing that Jake won’t allow Lauren near it. “No, if you see this, there is no unseeing it.”

Lauren thought she had it all: a loving partner, two great kids, a successful business, and a beautiful home in the San Francisco hills. But all of that is about to come crashing down, due to a missing husband, a hidden past, and a frightening secret that will shock a trusting wife to the core. Gene has enemies, and now they want something from Lauren.

Jake Wolfe is a flawed man who has a habit of being in the wrong place at the wrong time. He wants to leave his secret, violent past behind him, but when Lauren and her children are threatened, his protective instinct takes command. Jake soon finds himself involved in a dangerous conspiracy, targeted for death, and engaged in battle with a powerful, unseen group who will stop at nothing to get what they want.

Jake’s going to have to think fast and fight hard to protect Cody, Lauren and her kids.

Vigilante Assassin is “Jake Wolfe book two” in the ongoing series. It can be read as a stand-alone, or you can start with book one, titled: Dead Lawyers Don’t Lie.

Mark Nolan began his writing career as a successful entrepreneur who created news stories for businesses that were featured in The Wall Street Journal, National Geographic, Parade, Reader's Digest and The Associated Press. Nolan was born in San Francisco, grew up in the Bay Area of California, and has also lived in the Pacific Northwest and Hawaii. He has raised two great kids and one very smart retriever dog. He tries to make time every day to answer emails from readers. You can reach him and subscribe to his newsletter at marknolan.com.

I have volunteered to share my review and all the opinions are 100% my own. 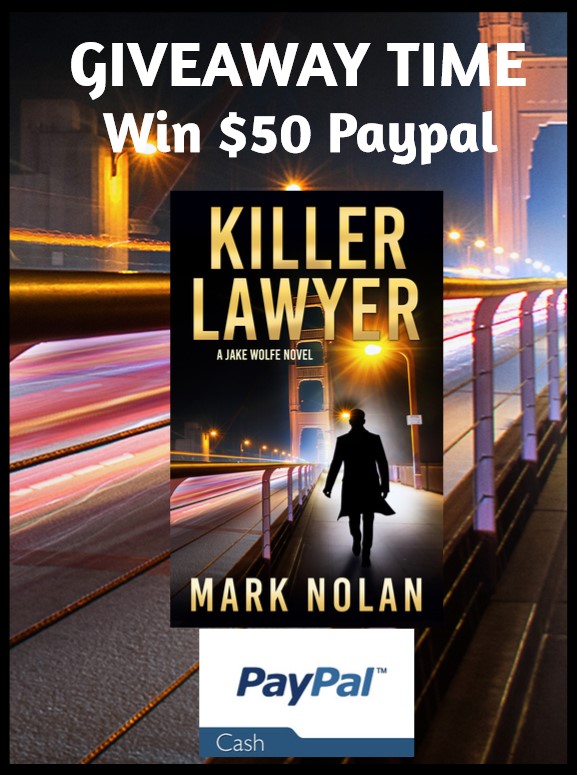 Enter Below and Good Luck !!