Forsaken by Larissa Ione is a short but interesting read/listen.  This is book 2.5 in the Moonbound Clan series. I have had this on my kindle for some time now, but recently got the chance to read it.

This installment introduces Lobo and Teyah. Lobo is a 120-year-old vampire who is also a skin walker. He can shift into any living form, be it human or animal. A former member of the Moonbound Clan, banned for shifting into the form of another clan member. Since then he has been wandering the woods and living a lonely existence.  That all changed when he rescued a wolf, that was injured and on the brink of starvation. She became his constant companion for 12 years.

What he did not know is that Teyah was no ordinary wolf.

I found Lobo to be an intriguing character. His protective nature led him to take a great risk to save Teyah’s life. A risk that would pay off in the end.

Teyah proved a fascinating character. Loyal and fiercely protective of Lobo. She showed courage in the face of danger.

Despite, this being a short read, the story packed a punch. There was sufficient romance, action and heat to keep me glued to the pages.

The fluidity of the story made it easy to follow. I loved the world building, which made me realised how much I missed this series.  I curious to know if there are plans to continue the series. The good thing about this, there is no need to read the previous books prior to reading this installment.

Narration
Amy Landon narrated the story. This is my first time listening to her work and I enjoyed every moment. She did a good job with the narration. Her pace and tone fit the story well. 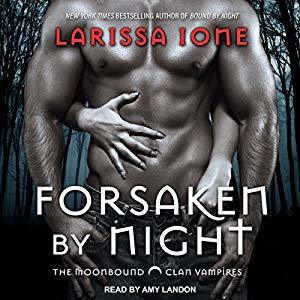 After accidentally shifting into a wolf—and getting stuck—Tehya, herself a vampire, has spent the last twelve years as the pet of Lobo, another vampire who has the unique gift of communicating with wolves.

When Lobo found Tehya starving and nearly frozen to death, he took her in and nursed her back to health, all the while completely unaware that she was really a fellow vampire. But there was always something special about her, and he finds out exactly how special after she’s injured and returned to her true form. Desire collides with danger as he soon finds that he must protect not only Tehya but also himself...