This book has been on my TBR for sometime now. I received copies in both paperback and ebook format from the author, but never got around to reading it until now. Getting the audio book from Audible Escape was an added bonus.

Burn for Me by Cynthia Eden is the first book in the Phoenix Fire paranormal series. I have read a few books by this author and I enjoyed every one of them. I found myself pulled into the story and I was caught up in the world the author created. The suspense, action, and characters made this a great page turning experience.

This differs from my usual paranormal reads. The story features shifters and vampires; however, there were a few unique supernatural beings.

I found the world Eden created fascinating. Paranormal beings have made themselves known to the human world and are growing in numbers. The humans feel threatened by their existence, but there are those who want to study them, hoping to create an army of super soldiers who cannot die.

I enjoyed getting to know the characters. Eve is a reporter who went undercover to gather information about the top government secret program called Genesis. What she discovered would change her life dramatically.

In the first part of the story, Eve proved brave and tenacious. However, sometimes her acts of bravery turned into acts of stupidity.

She had a past that shrouded in secrets. It is clear she is not human, but the story never revealed what she was until near the end. It had me guessing throughout the story as to her true nature.

Cain O’Connor is not your typical shifter. Captured and held captive in the same facility that Eve had undertaken her undercover assignment. It was in this facility that they subjected the paranormal beings to experimentation and torture.
I loved getting to know Cain. His unique abilities forced him into the dark side each time he used them. Eve was the only one who had the power to save him the dark side.

Wyatt is the scientist responsible for carrying out the unspeakable horrors under the guise of experiments on the paranormal beings. Evil and insane, which made him the perfect villain. Up on learning why he is so evil, I had some sympathy for him, but those feelings were fleeting.

The secondary characters helped to drive the plot and made things interesting. I had a particular liking for Trace, a werewolf and Ryder, a vampire. I would love to learn more about them.

The romance was hot in every sense of the word.  Although, not a big fan of their romance, it worked for the story. They could not get enough of each other. You would expect that being chased by a mad scientist and his goons would put a damper on their steamy connection, but it had the opposite effect.

The story was interesting. It started out on a high note and kept that momentum to the end. Danger lurked in every corner. I found some events monotonous, but despite this, I still had a good time with the story.

Narration
Jillian Macie was a new to me narrator. I enjoyed listening to her. She brought the characters to life, and she captured their voices well. 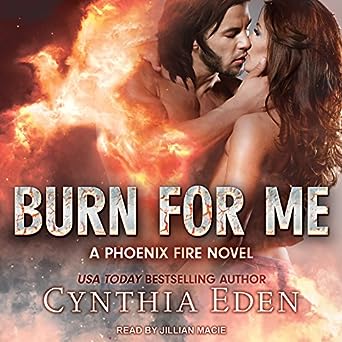 Eve Bradley was undercover looking for a story, not a cause. But something about the man they called Subject Thirteen got her involved. The scientists said he was a devil, and they had a decent case: Terrifying power. A bad attitude. And looks that could lead anyone to sin. . .

Cain O'Connor knows the minute he catches her candy scent that Eve could drive him wild. But she's a threat--in a way no one has been for him in years. She's safer away from him, too. But with a powerful conspiracy determined to shut Eve up for good, there's no time to argue. All they can do is trust their instincts--and their hearts. . .