I purchased this audio book during one of Audible’s two for one sale. I chose it because I heard great things about it, however the book was nothing like I expected.  I know many of my blogger friends enjoyed this book, but it did not blow me away as I hoped it would. Not that the story wasn’t good, in fact I found I couldn’t give up on it as I wanted to know if it would end the way I expected. Well, the details leading up to the end may have differed from my expectations, but the result was exactly what I expected.

What really got to me about this book were the characters. I knew prior to starting the book that the main character (Joe) would be someone that I would probably end up not liking and I was right; I did not like him one bit.  I hoped the secondary characters would have provided a balance to his madness. Instead, they proved to be no better than Joe was, with the worst being Beck, the woman he stalked. Throughout the story, I kept wondering what Joe saw in her. Self-centered, shallow and dishonest would be the perfect terms to describe Beck and her friends were no better.

With YOU, we get the story from Joe’s POV, now that was one crazy journey. OMG! Demented but smart, Joe knew exactly what to do to get what he wanted, and he wants Beck. The lengths he went through to achieve this was horrific.

On the surface, Joe appeared sweet and harmless, but being inside his head creeped me out, but I could not stop listening. I had to know what his next move would be. I was not a fan of his inner dialogue as he rambled on and on, with no end in sight, which exasperated and frustrated me.  As a result, I read other books in between to combat the frustration and annoyance. Eventually as the story neared the end, it picked up the pace and things became interesting.

The story highlighted the dangers that come with the use of social media, credit cards and mobile phones. It is scary knowing that we are not safe using the things designed to make our lives easier. Having been a victim of online banking fraud, this scare for me was real.  Beck made it easy for Joe to get to her as she posted her life all over twitter and Facebook.

Narration
I enjoyed the narration by Santino Fontana.  He captured every facet of Joe, bringing his character to life. I am glad I listened to YOU as it enhanced my experience with the story and made it easier for me to endure to the end.

Conclusion/Recommendation
Overall, an interesting take on stalking and obsession.  Please note this is not for the faint of heart, so if unreliable and crazy characters, violence and a host of other scary issues, do not freak you out then you can give YOU a chance. 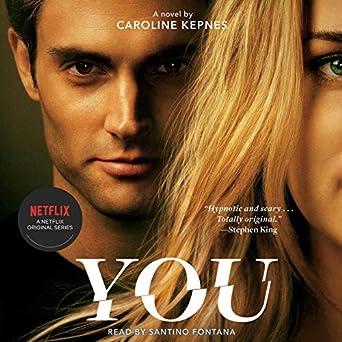 You walk into the bookstore and you keep your hand on the door to make sure it doesn't slam. You smile, embarrassed to be a nice girl, and your nails are bare and your V-neck sweater is beige and it's impossible to know if you're wearing a bra but I don't think that you are. You're so clean that you're dirty and you murmur your first word to me - hello.

When aspiring writer and recent Brown graduate Guinevere Beck strides into the bookstore where Joe works, he's instantly smitten. Beck is everything Joe has ever wanted: she's gorgeous, tough, razor-smart, and sexy beyond his wildest dreams. Joe needs to have her, and he'll stop at nothing to do so. As he begins to insinuate himself into her life - her friendships, her email, her phone - she can't resist her feelings for a guy who seems custom-made for her. So when her boyfriend, Benji, mysteriously disappears, Beck and Joe fall into a tumultuous affair. But there's more to Beck than her oh-so-perfect façade, and their mutual obsession quickly spirals into a whirlwind of deadly consequences.