- Friday, January 03, 2020
Today I am excited to welcome author Raquel Rich. She will be sharing details of her latest book, Hamartia, which was released on August 21, 2018, as well as her life as a writer.

Raquel Rich is a full-time sci-fi author and occasional blogger. She loves to travel, suntan, walk her dog, and is obsessed with all things Beauty & the Beast. She despises cold weather, balloons, and writing about herself in the third person but noticed all the real authors do that. Raquel left (ok, got let go from) a career in the travel industry and rather than looking for a real job, she wrote her first book, HAMARTIA. Born and raised in Canada to Brazilian parents, she lives in the Toronto area with her family. Married to the guy she’s been with since she was fifteen (her baby daddy), her superpowers include being a mom to their two awesome grown-ass boys and one fur baby.

Raquel Rich is a proud member of Broad Universe: an international, non-profit organization dedicated to promoting, encouraging, honoring, and celebrating women writers and editors in science fiction, fantasy, horror, and other speculative genres.

Who was your favourite author growing up?

Stephen King was my favourite author as a kid. Pet Sematary was the first of his books that I read. I was eleven or twelve. I remember hiding under the blanket gripping the book in one hand and a flashlight in the other, scared to turn the page but unable to stop myself. It was pure torture. I went weeks without sleeping. Pet Sematary marked the start of my Stephen King binge, lasting all the way through my teenage years.


Was there a particular point in your life that you realised you wanted to be a writer?

Subconsciously I’d been pining to be a writer my whole life. I didn’t realize it until I was about 50% through the first draft of my first book, Hamartia. I know it’s a weird time to figure it out but that’s what happened. It just hit me— BAM!


What is your average writing day like? Do you have any special routines, word count, etc?

I write every morning with a giant mug of coffee at my side and my dog at my feet. I need to be in the sunniest spot and so I rotate around the house or back and front yards chasing the sun. As for word count, I’m a slow writer and find counting words demotivates me. Instead I write what I can; a chapter, a page, or sometimes just a paragraph, and then I try not to beat myself up when I throw the towel in for the day. Writing. Is. Hard.

How did you go about researching the content for your book?

If you checked my search history, you might see things like “what’s the cleanest and quietest way to dispose of a body?” but mostly, you’d find that I Google a lot of definitions to simple words I’ve been using all my life just to make sure I’ve been using them correctly.

How did you come up with the title of your book?

When I first started writing the story, the protagonist, Grace, had no flaws. Then I shared a chapter or two with my sister. She told me the plot was cool but commented that no one would care about a perfect character.

“You’re missing a hamartia,” she said.

She explained it was a literary term meaning “a fatal flaw leading to a tragic hero’s downfall.” My sister was right. And so, not only did I ruin Grace’s life, but the word stuck with me.


How many books have you written? Any unpublished work?

Two! The first book I wrote was Hamartia. Hamartia actually won the grand prize in a contest and that’s how I published it. The second book I wrote was the sequel, Deus Ex Machina, which will be released in 2020.


Does writing energize or exhaust you?

Some days I can’t stop the creative flow and that’s when I’m pumped full of energy. But those days are outnumbered by the long periods of drought. Trying to tread my way through a dry spell when I’m thirsting for a drop of creativity is beyond exhausting.

On a typical day, how much time do you spend writing?

I write every day from about 9 AM until I’m hungry for lunch or until my dog begs for her afternoon walk, whichever comes first.

What is the most difficult part about writing for you?

Letting people read what I’ve written is by far the most difficult part of the process, but it’s also the most important part. It’s like handing your newborn bouncing baby boy to someone and hoping they’ll love him and care for him like you do, only much worse. When they hand the baby back to you, they tell you to change it, amputate its limbs, or sometimes they tell you it’s best to abort.

Please tell us one thing about your new book that readers won’t know until they read it.

Even though Hamartia’s theme is dark, there is a bit of humour peppered throughout. A lot of it goes over many readers’ heads, but sometimes they catch on to my sense of humour. This tells me they’re just as twisted as I am.

What inspired you to write this book?

The inspiration for Hamartia came from a conversation with my son about an exhibit at the Science Museum in London, England. It was an exhibit on fears and phobias which explored some popular beliefs, one of which was reincarnation. The belief that phobias were the result of a negative past life experience sparked my idea of travelling to those past lives. And if you could travel to those lives, what could you do while you were there? My imagination snowballed into the world I created for Grace, where people travel to past lives to clone souls.

What do you like to do when you're not writing?

My biggest love is spending time with my family. They’re pretty awesome. And other than my everyday hobbies like reading, binging shows, swimming, tanning, hiking, I also love to travel—a lot. I’ve been to 32 countries, repeating most of them over and over, and I hope to hit 50 countries before turning 50.

What was one of the most surprising things you learned in creating your books? 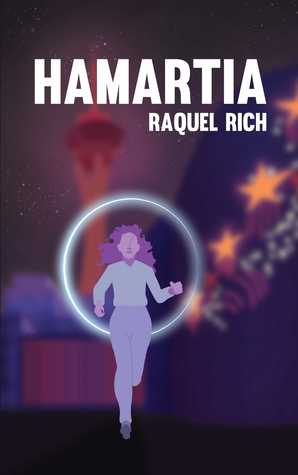 First, the Metagenesis disease will tear his soul from his body, and then it will kill him. Desperate for a cure, Grace agrees to take part in an illegal clinical trial cloning souls. Supported by her best friend Kay, the two embark on the ultimate “Vegas Vacation” to the past in search of the right soul to clone, racing against time to save Jordan’s life.

But someone is trying to stop them and when they discover why, Grace must make a choice: let her son die or kill her husband. If she kills her husband she triggers widespread Metagenesis, sealing the fate of the human race with a new plague.

Humanity is counting on Grace choosing to let her son die.